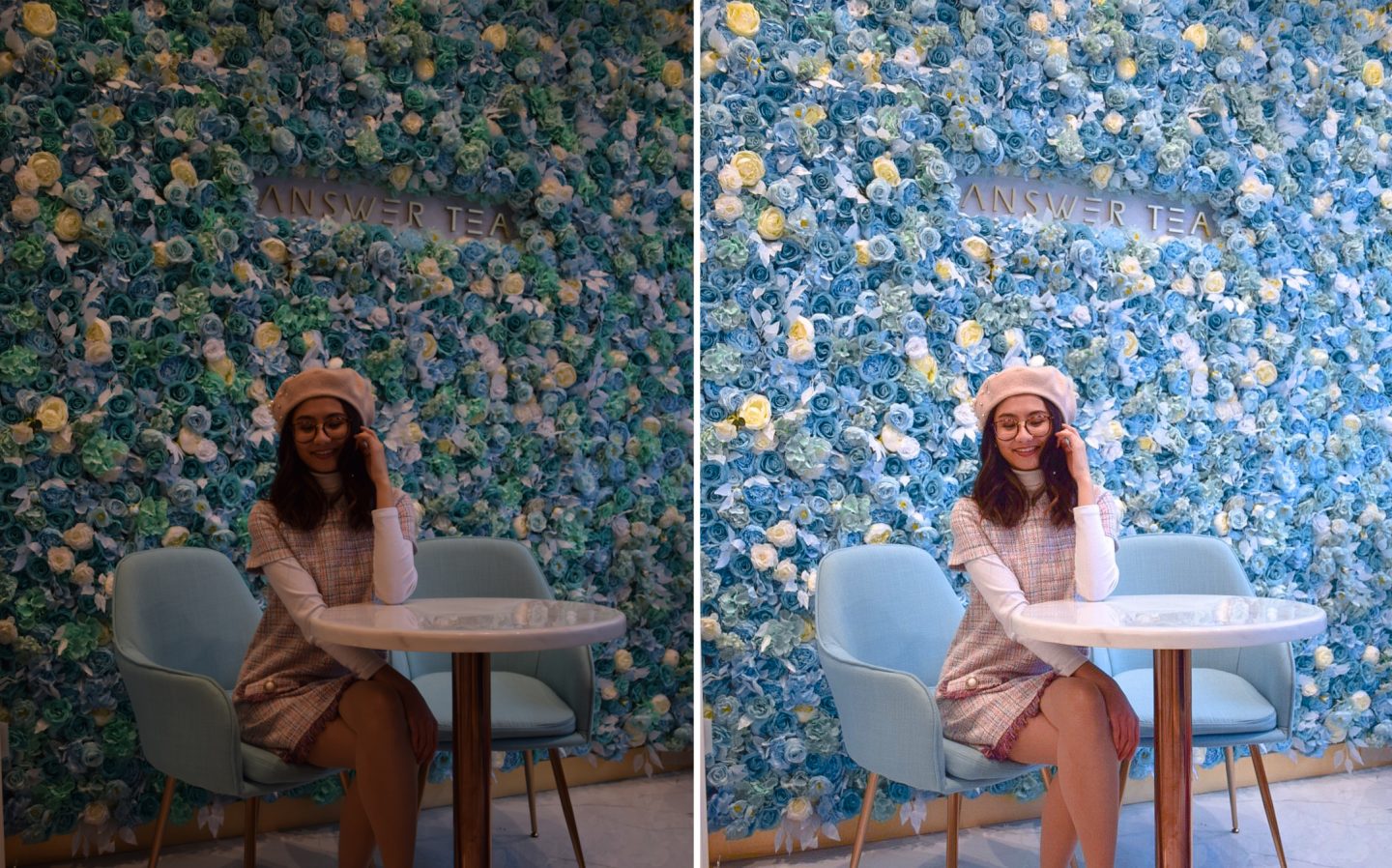 If you clicked this post, you’re probably looking to improve your editing skills. Believe me, I’m no master but I’ve had comments and compliments about my editing ever since I started my “Tap To Edit” on Instagram. If you take a look at my Instagram, it’s obvious that I don’t have a “set” theme. Recently, I’ve been having blocks of 6 photos where I think of a concept and show photos from then. As much as I love the idea of having everything be cohesive, it restricts my style a lot in terms of colour. So my editing process is mainly restoring the original colours by showing it’s true form. Obviously not every photo is the same so the editing isn’t the exact same but I decided to show you the types of struggles I’ll have and how I combat that through post-processing. I went from easiest types of photos to the hardest ones I’ve ever edited! Most of the photos I post on Instagram are edited on my phone using the Lightroom app.

The best thing you should try to do is always take photos in natural light. You hear it all the time but if you’re only restoring true colours and not having the most intense editing, then it definitely makes your life easier. Even when I shoot in natural light, I tend to boost the contrast just to make the colours stand out from one another. Sometimes I’m lucky and don’t even need to change anything!

When I shot my NYE lookbook, it was actually a storage unit that was converted into a studio. The owner had lighting equipment that we used. We ended up using two lights on both sides so that it wasn’t unbalanced lighting on my face. Nonetheless, the lighting was still a bit dark. The shutter speed also plays a huge factor because I could only have it be so fast and Noah can only be so stable haha. We ended up making it a bit darker so that the shutter speed was high enough for Noah not to take a blurry photo. For post-processing, it was a simple fix by brightening up the image using exposure. Be careful not brighten it too much because it’ll be too white. From there, I usually saturate the image a bit to make sure the colours are the most accurate. 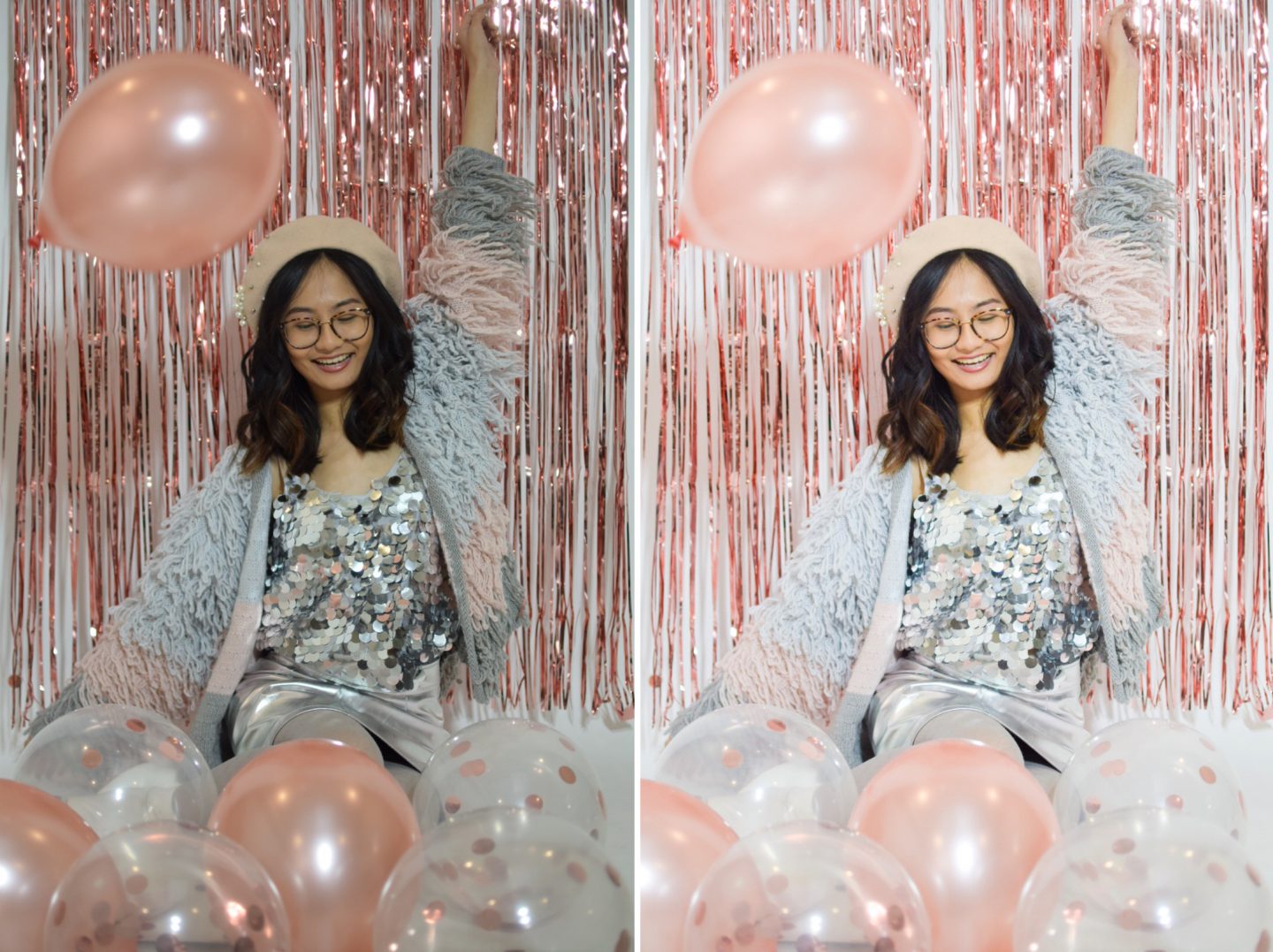 I usually edit my photos in that format (minus the extra lighting used!) I tend to use that trick of darkening up the photo a bit because I’ve been having trouble getting proper lighting in most indoor places. I really should be shooting in a RAW format because you have more flexibility when it comes to editing the lighting of a photo but it does take up more space and to be honest, I’m lazy and don’t want to convert it back to a JPEG afterwards…

With a lot of images I edit, it tends to have a yellow tint to it. If you’re new to editing, the “temperature” of a photograph basically will make a photo either more warm (yellow-tint) or cold (blue-tint). Without getting too much into specifics, I usually make it a bit more cold since I would rather have it originally warm. It’s the same kind of mentality I have where I’d rather have a photo too dark and I can brighten it up versus where it doesn’t work as simply if it were opposite. I also generally like it a bit more warm than cold if I have to settle! 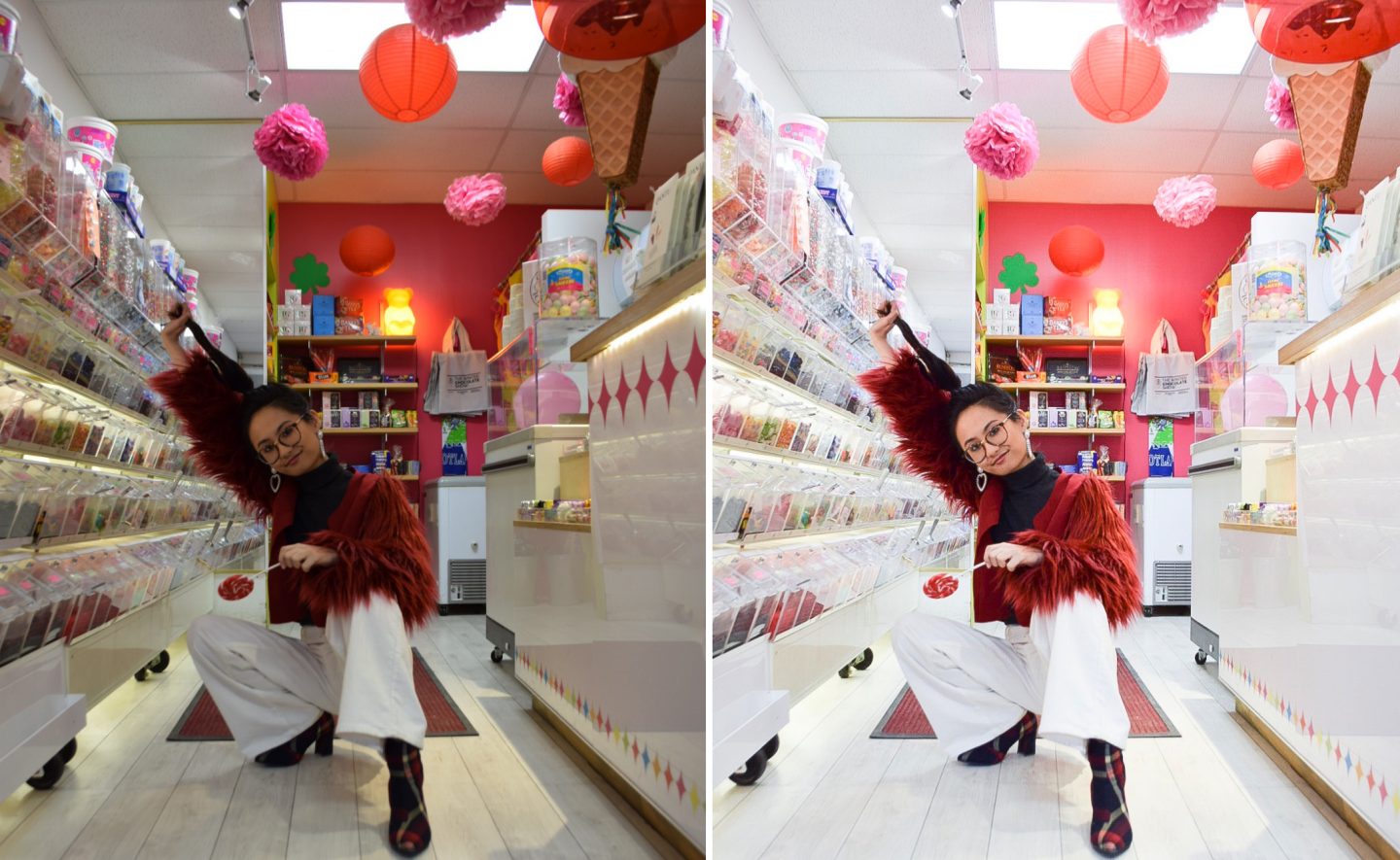 I’ve had many photos where fixing the temperature was not enough. Another problem that photos can have is it have a green or purple tint. Basically you go into the Lightroom app and if you’d like to remove the green tint, you’d move it towards the purple side and vice versa. There are times where I have both the temperature and tint fixed as much as possible but something still looks off. This is where I start to play around with the saturation of colours in the “Colour” section. To use this, go to Colour > click “Mix” and then you’ll be given the options to use any colour and adjust the Hue, Saturation or Luminance of that specific colour. Below is a screen shot of what that section looks like: 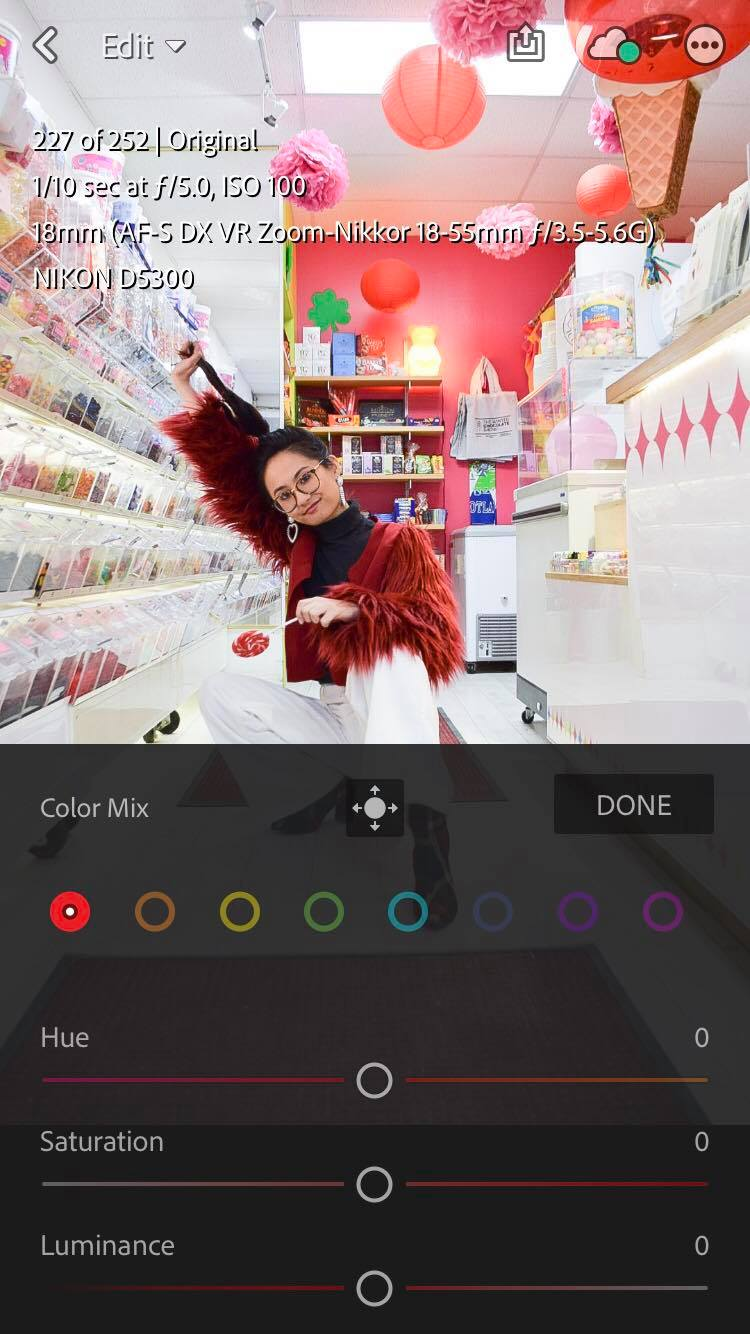 The problem usually is with yellow, blue and/or green when it comes to my photos. I’ll usually go into the saturation section of the colour and decrease it. For instance, the photo of me in the all purple outfit below was still a bit yellow so I desaturated it almost all the way. You do have to be careful when you play around with yellow and orange mainly because that will change your skintone so you want to make sure there’s an even balance. Also, you have to remember that if you’re desaturating a certain colour, you’re desaturating that colour in the entire image, so if I were wearing a yellow top, that would make my entire top become grey. You’ll see that in my very last photo I show with a vintage rotary telephone that the phone is white. Originally, it’s actually a cream colour but because of the intense editing process I went through, I decided that keeping it white was much simpler! 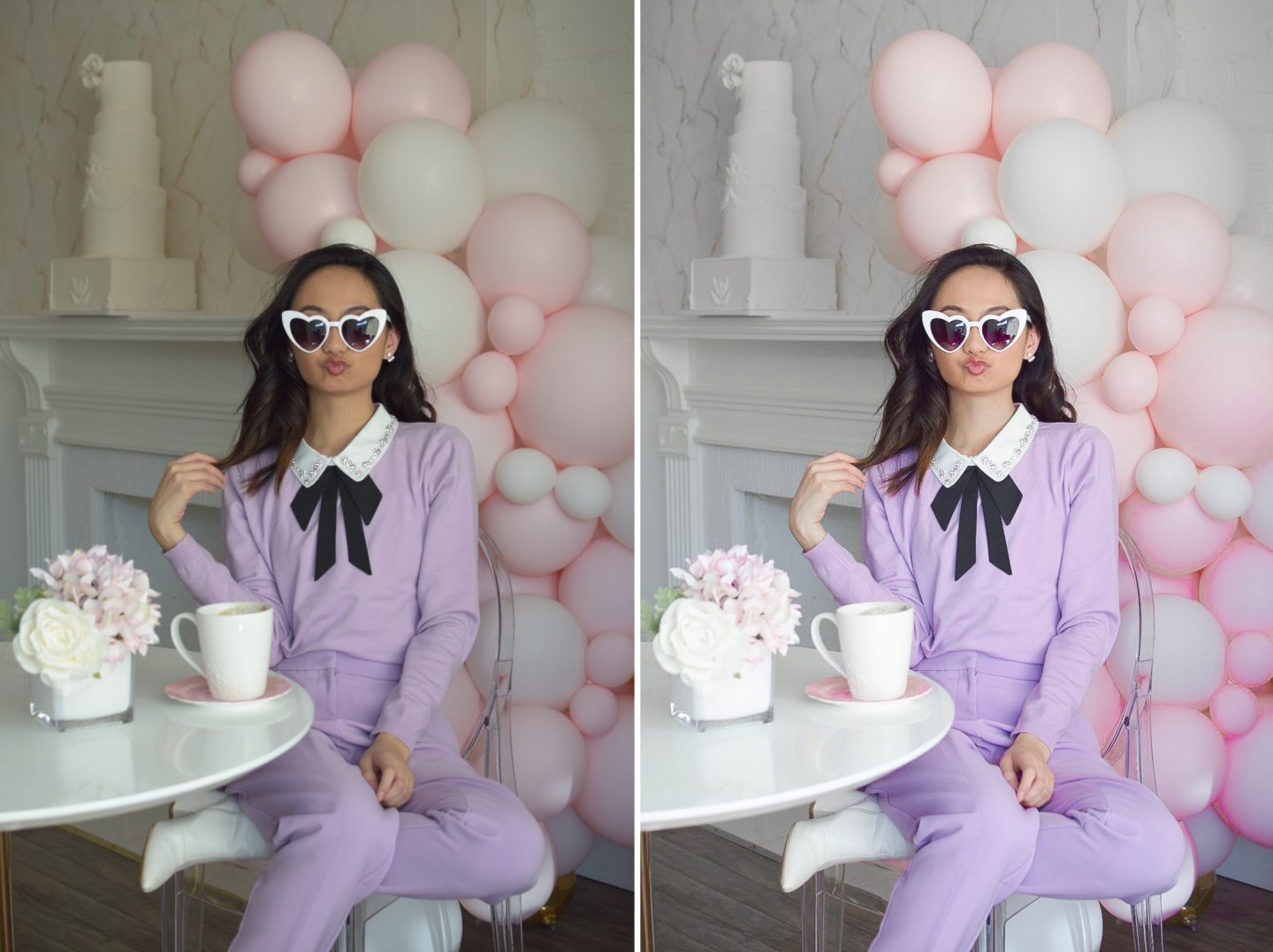 NO LIGHT, NO PROBLEM

Sometimes, the lighting is just absolute crap…when I took photos at the Omni King Edward Hotel, I was hoping the skylight would help out light the lobby up for when I was going to take photos. Unfortunately, there was a huge snow storm that day and snow ended up covering the entire thing.  A huge help has been bringing my Joby Gorillapod so that Noah and I can get a still shot. In this type of case, I have to hold the pose for a few seconds so that the shutter speeds captures it clearly. Also, since there was absolutely no light other than the few potlights around that area, I ended up bumping up my ISO as much as I could without it becoming too grainy. As for the editing process, it was the exact same process as the yellow tint problem. 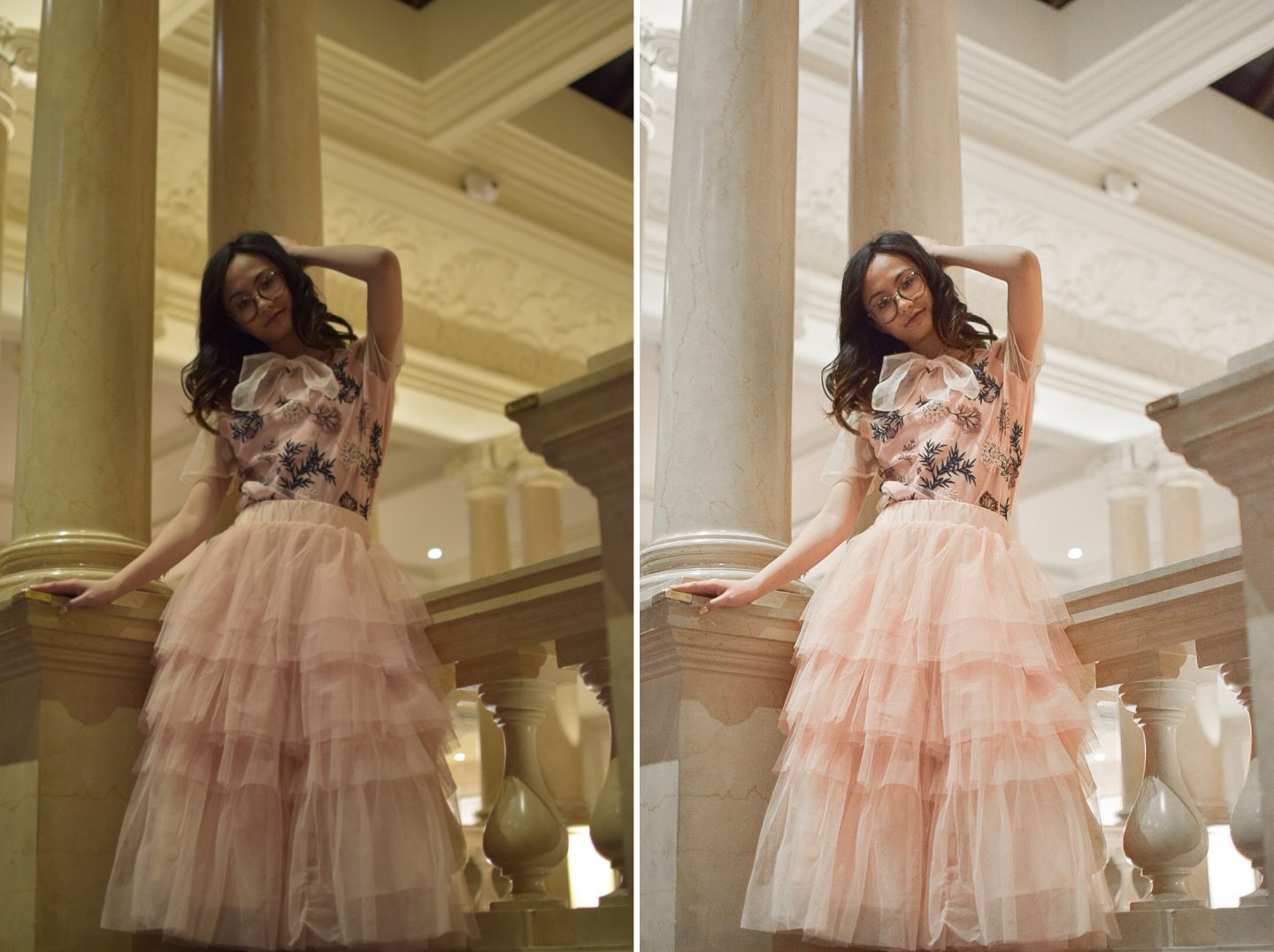 I’m definitely no expert when it comes to post-processing but because of the numerous questions and interest in my “Tap To Edit” highlight, I thought I would share how I learned the ways to my current editing process. It is without a doubt that I play around a lot when it comes to certain aspects of Lightroom but for the most part, I do have a base knowledge of what each function does which obviously helps. For the next three photos, I was pretty much clueless on how to edit it. It was to the point where I thought I wasn’t going to upload any and thought how I wasted time and money into the shot. 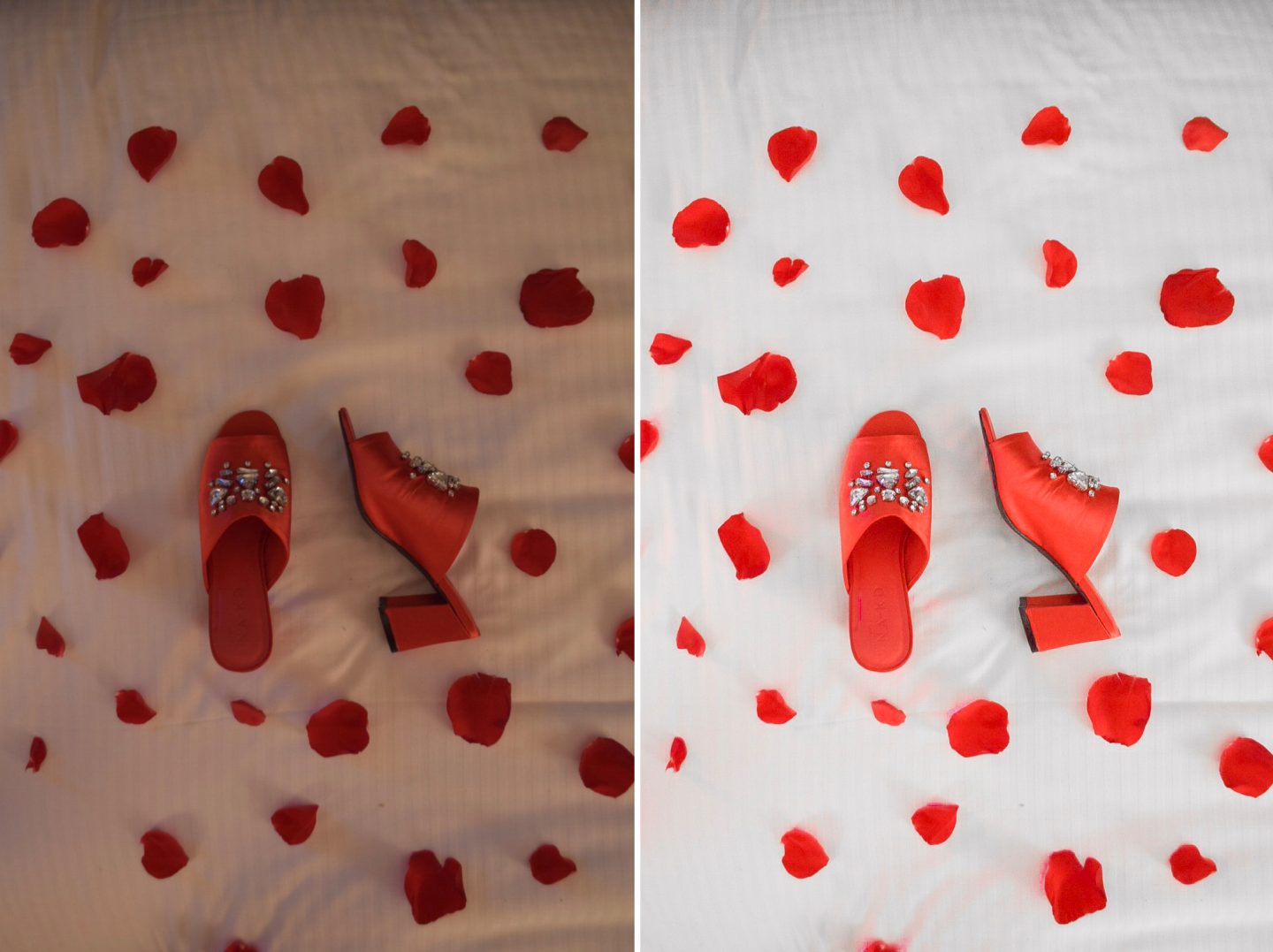 Anyone who has extensive knowledge when it comes to post processing could cringe when reading this because it could be 100% wrong but here is how I tackle extremely dark photos and tinted photographs. The first step I always do is exposure so I can get the lighting much better. Honestly, I really did crack up the exposure for this photo but it was needed. Once I brighten it, I then look at what needs to be fixed – is it just the temperature and tint? Or is it worth it to completely desaturate a colour? I actually ended up desaturating orange and yellow. I always pay attention to my skin tone because you always want to make sure it’s accurate. It can 100% look fake otherwise. I highly recommend shooting in RAW because the capabilities when it comes to lighting increases versus shooting in JPEG! 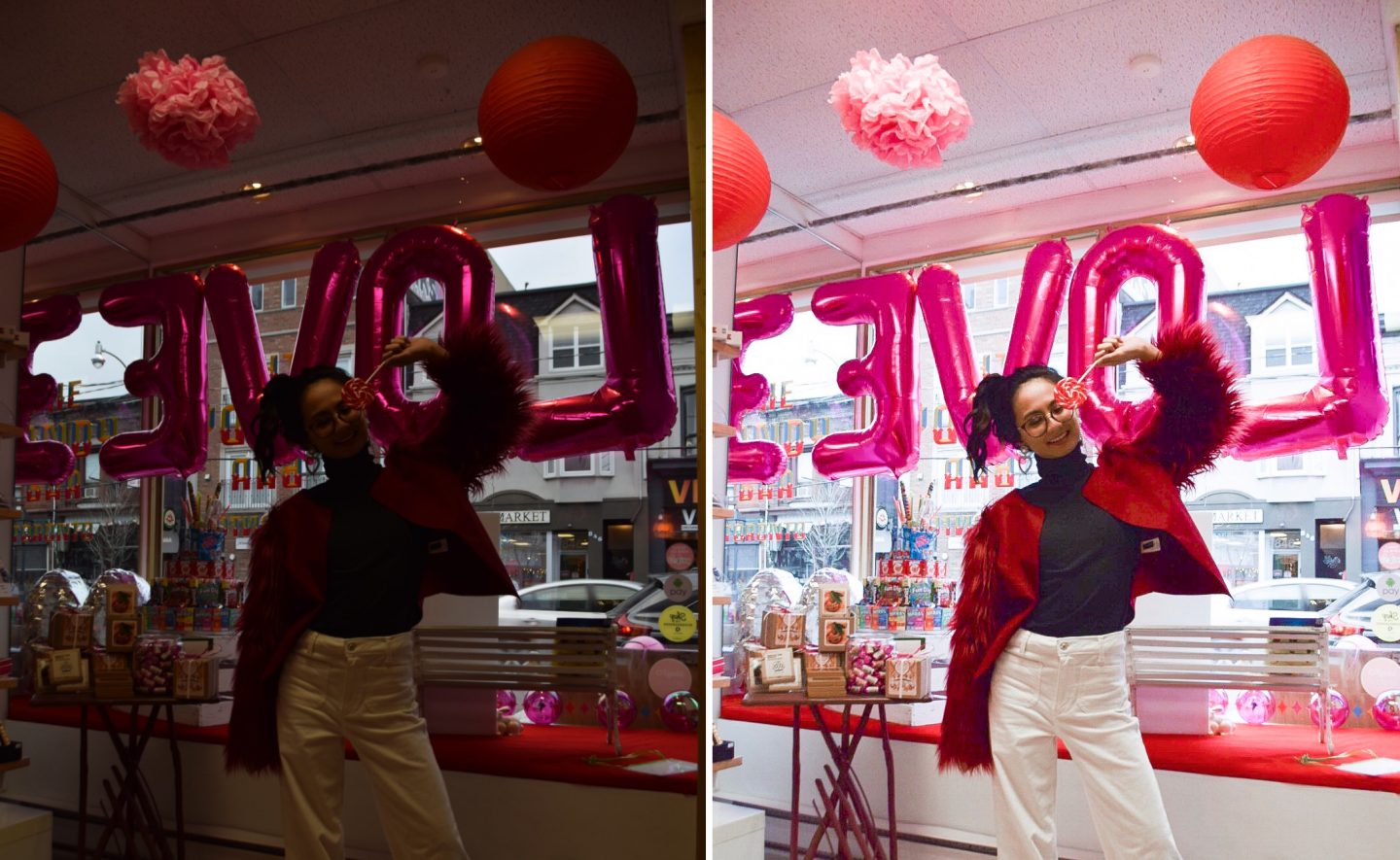 For this particular photo, I honestly struggled so much that I thought I wasn’t going to post it at all. The original was terrible and I had no idea how to fix it so again, I had to play around. You can tell from the before photo how terrible it was and since I’m not a professional photographer, nor do I work with one, it was a lot of me guessing on how to fix it. I did my normal exposure and contrast fix but it looked off. It was obvious that the lighting was off since the bedding was pure white, I knew I had to desaturate the yellow. After that, I restored some of the colour by boosting the saturation a bit. Something was still off so I decided to play around with the shadows and highlights (something I don’t normally do) because my hair looked very dry in the photo. I ended up lowering the shadows completely so that my hair was the accurate colour and all was well! 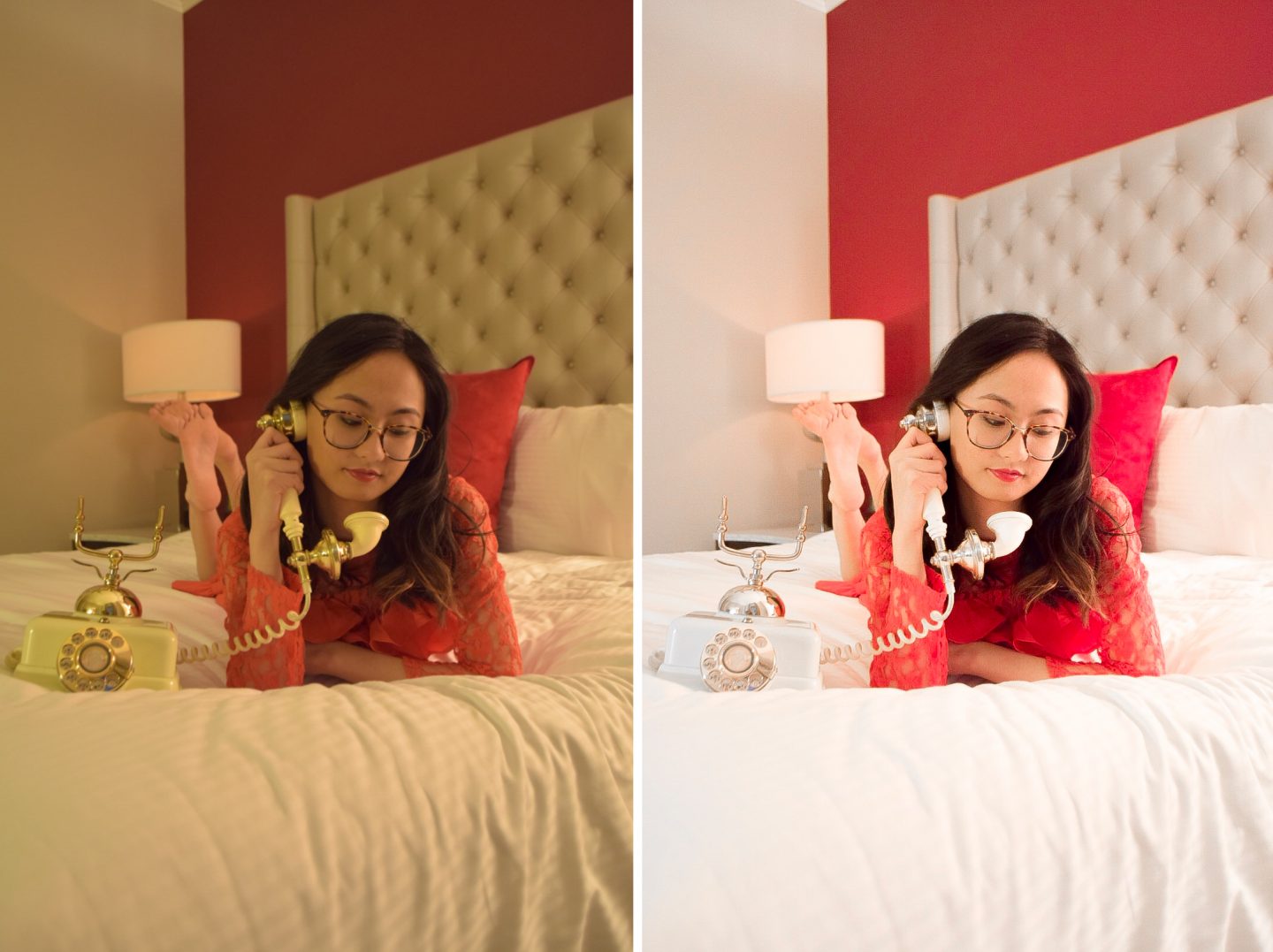 Anyways, I hope this post helped in some way, shape or form! I never thought I’d write it because I don’t think I’m an expert when it comes to photo editing but it was highly requested ever since I’ve been posting my TAP TO EDIT! Stay tuned because I’ll be uploading more on my blog and Instagram this summer 🙂

Testimonials
Adrienne has been an absolute pleasure to work with over the last few years. We’ve collaborated on a couple of campaigns now, and not only does she get great results for our clients, but she always goes above and beyond what we ask for and creates the most exceptional, creative content! Adrienne has an eye for art direction like no other, and any brand would be very lucky to get the chance to work with her.

It has been a great experience working with Adrienne! She is creative and talented and provided much more content than we expected, which was greatly appreciated! We worked together on a campaign and would gladly work with her again in the future. With creativity and passion behind her work, it is exciting following the fresh content she continues to create.

Adrienne has a unique style, and really was a pleasure to work with!